Since 2011, October 17th is ‘End Poverty Campaign Day’ which was approved by the United Nations to encourage joint-behavior worldwide. ‘Raonatti’(The Kookmin Bank-YMCA volunteer team by college students in Asia) has been doing End Poverty Campaign in 7 Asian countries and Korea to enhance solidarity with Asian local YMCA and youth, and eradicate poverty.

We do not define the concept of poverty in just economic aspects. End Poverty Campaign with Raonatti expands its concept by taking various issues on poverty that society is now faced with and urge people to take action.

This year’s topic of End Poverty Campaign in Korea is to reduce prejudice against Asia. Among many poverty-related issues, the campaign was planned based on the thought that prejudice could be poverty. Therefore, the campaign was going on to reduce discrimination and wrong idea of Asia in Korea, and get to know about Asian countries better.

The Seoul team was running the booth in Seoul Migrant Art Festival. In a way to

reduce prejudice against Asia, there were many programs that people could participate in; Asia quiz, Asia puzzle and Asia picture book.

Ansan YMCA prepared ten quizzes on culture, features and wrong ideas of Asia to provide people with correct information and reduce prejudice against Asia. Ansan YMCA explained MDGS to citizens, and urged people to put a sticker on the issue what they thought of seriously. In addition, there was bracelet-making performance with recycled cloth.

With youth of Dili YMCA and others, Raonatti talked about what poverty is and what they can do to solve it. As a related activity, participants drew pictures representing unification and solutions to matters on youth(unemployment, violence, environment and so on)on the wal

In Bangladesh, Raonatti decided to have a sex education class following the idea that there is no sex education class though matters such as sex abuse and sexual discrimination are being raised as social issues in Bangladesh. The two classes were divided based on the sex. Both had the similar sex education for students. In the female class, especially, they learned how and why say “NO” when they are faced with unwanted situations.

Based on the idea that people in Kallar had overall low self-esteem, Raonatti planned the campaign to boost their confidence. Visiting school, they had an O/X quiz show to expand the concept of poverty, and made Happy Tree with students speaking out their emotions and praising each other in front of other peers to increase confidence.

Raonatti in India was focused on issues about a lack of public toilets and insanitary environment around Mumbai. They informed citizens of this situation with displaying related information and distributing handouts. Those who were interested in this matter, were able to raise their opinions and suggestions about it to Raonatti. There were many events everyone could participate in, and Raonatti gave out soap to urge people to wash hands after using toilet. Furthermore, they showed iconic performance to let people know about a lack of public toilets for women in Mumbai.

Raonatti in Cambodia held ‘Talk Concert’ to share ‘my and your poverty’ each other as End Poverty Campaign. There was the class for children how they felt about poverty, and the banner was made by hand-stamps to draw people’s attention to the campaign.

Raonatti in Thailand decided to hold ‘Talk Concert’ to deliver End Poverty Campaign to people more interestingly. Beforehand, they visited the University of Mejo to encourage students to participate and put up posters to advertise the campaign. They rented a cafe to hold the concert, displayed pictures on poverty, and performed Korean traditional performances. By doing this, they drew attention from people and shared various opinions about poverty.

Photo shoot, “We are Asian

During the campaign week in Korea, the photo shoot campaign with Asian residents around was being held as a way of getting closer to Asia. When taking pictures people should hold the banner written in ‘We are Asian.’ Many Raonattis and citizens had participated and sent pictures to YMCA. 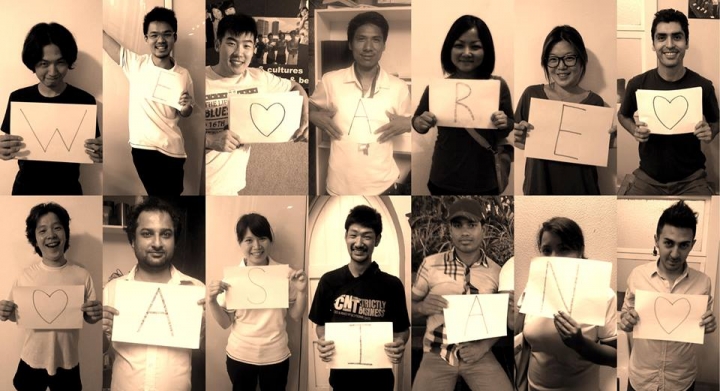 Back In Jun, who was the 9th batch and the Cambodia team, had his own campaign with people who he met in Australia. After talking about poverty with various people beyond nationalty, sex, and age, he sent many photo shoots to Korea.